Is the drama finally over for Cardi and Offset?

Cardi B has responded after a woman called Celina Powell was exposed for lying about a paternity test with Offset.

Powell recently posted a paternity test online and suggested that it proved Offset was the real father of her baby, Karma.

Cardi B and Offset previously suggested she was lying about the baby.

However Powell appeared to be exposed by her best friend on Twitter, for altering the legal DNA documents to falsely accuse the rapper of being the father.

In two different videos that have leaked online, a woman who is believed to be Celina Powell can be heard talking about how she altered to the papers to make people believe the story.

"I think I'm just gonna alter those for these papers and I think that'll be good enough," says the voice in the video.

"I swear, I will fight her... This is like my credibility on the line and if I can just get people to at like least believe it and then like leave me the f*ck alone, that's fine," said the woman who is alleged to be Powell.

Here’s the rest of the video btw pic.twitter.com/NATxBLZRnm

Powell then apologised to her best friend, who leaked the phone calls. 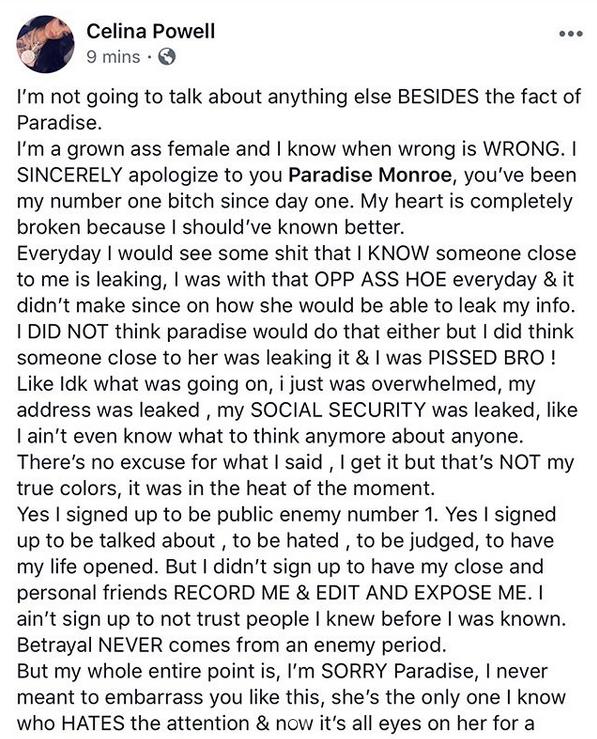 After seeing the drama unfolding online, Cardi B responded in typical style.

“Lmaaaaaaoooooooooooooooo Wow people are really crazy,” she wrote on Twitter. “They CAN SUCK MY D*CK!”

Exactly .They CAN SUCK MY DICK! https://t.co/J1oKhlLQAB

Meanwhile, Cardi B who is currently pregnant with Offset’s baby, will reportedly deliver the child in July.

Offset admits he is "in a dark place" following Takeoff's death