Is this the end for Sean Don and Penny?

Jhené Aiko has sparked rumours of a split with boyfriend Big Sean after posting a mysterious message on Instagram.

The 'Trip' singer uploaded a photo appearing to show herself lying on a tattoo artist's table, with the artist behind her holding a glowing needle.

Jhené Aiko Responds To Rumours That Big Sean Cheated On Her

"Realising ALL things in life are temporary, I rejoice in this moment," she wrote, quoting herself. "Cheers to old beginnings and new endings," she wrote in a following post.

"It's never too late to edit," she added, prompting many to believe that the portrait tattoo of Sean on her forearm is undergoing removal.

Eagle-eyed fans also pointed out that Aiko doesn't appear to be following the rapper on Instagram anymore. The pair have been publicly dating since 2017. 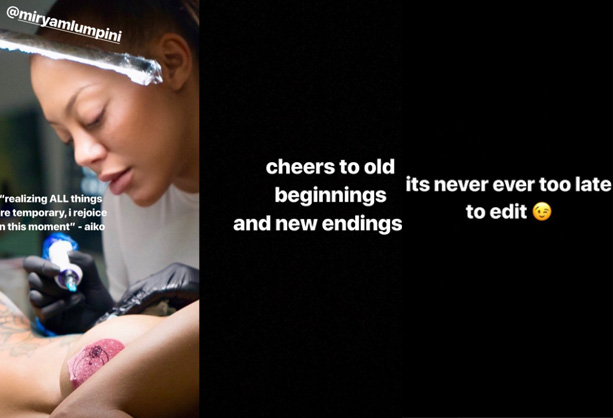 Following the post, fans have taken to social media to speculate on the relationship between the famous couple, and the situation regarding her life-like tattoo.

"Why do people do that to themselves, stop getting other people’s names, faces that you’re dating tatted on you. It’s not smart," wrote one user.

"Love is cancelled," wrote another.

Jhene Aiko & Big Sean split and she got that huge tatt of him. Why do people do that to themselves, stop getting other people’s names, faces that you’re dating tatted on you. It’s not smart.

Love is cancelled. @JheneAiko and @BigSean appear to have split pic.twitter.com/prWc4g7VF4

Say it ain’t so Big Sean and Jhene Aiko

There’s news bout Jhene Aiko & Big Sean breaking up. She has turned off comments on her IG photos.

Both Jhené and Big Sean are yet to respond to the reports.