Beyonce Unveils New Video For '7/11', Basically Throws A Party In Her Hotel Room 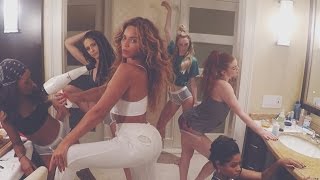 You need to watch this epic new video from Beyonce.

After the song leaked online, Beyonce has surprise released the video for '7/11'. The track is one of the new songs from the platinum edition release of her album 'Beyonce'.

The video sees Beyonce and her friends throw a pretty epic party in their Beverly Hill hotel suite, which includes drink, lots of dancer and one point when Beyonce make a phone call on her foot.

The playful video is the latest to be released from the 'Beyonce' album series. The platinum edition, which features four new songs, is released on Monday (24th November).