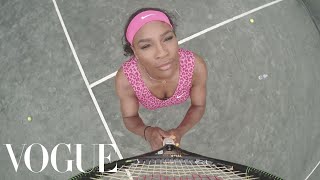 As soon as Beyoncé released her high energy video for '7/11' earlier this year it was obvious that remakes and spoofs would soon flood in - and they did, but few have been as much fun as Serena Williams' new take on Queen Bey's hit.

The sportswoman teamed up with Vogue to make a tennis-themed (what else?) version of the video, reenacting exact scenes found in Beyoncé's one, including dancing in hotel hallways and bathrooms, whilst also adding in a few of her own original ones.

Head to toe in sports gear, Serena - the 19-time Grand Slam winner - shows off her best tennis skills as she totally kills the routine.

Watch the full thing above.