Azealia Banks has slammed Nicki Minaj for appearing to mock her in new mobile game ‘Nicki Minaj: The Empire’.

A screenshot from the game appears to show Nicki throwing shade at Azealia Banks, through a character called Fan2Sea. 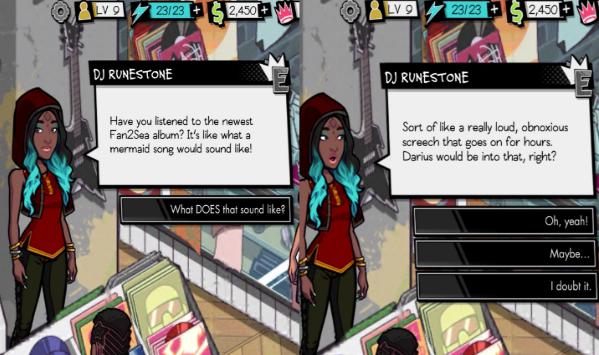 ‘Fantasea’ was the name of Azealia Banks’ critically acclaimed debut mixtape, which was released in 2012.

After finding out about the game, Azealia Banks has unleashed a scathing attack on Minaj, comparing her to McDonalds.

“Nicki girl….. now listen. Don’t start throwing shade cause you miss safaree and know that I’ve actually made a BANGER with him.

"Don’t get mad, get even. Slim down a bit (especially in your neck and arms). Decrease the butt just a bit (I’ve seen your butt make some really expensive dresses look really cheap) and STOP WEARING SPANDEX AS AN OUTFIT FOR ****S SAKE.

“Also stop calling yourself the queen of rap. Queens don’t wear spandex sweety. Marketing genius yes, but your cheap made in China perfume smells like car freshener and your beverage tastes like kitchen cleaner.

“McDonalds sells a lot of burgers but no one is telling McDonald’s that they’re the pinnacle of cuisine and taste. This is true of you.

“You run around the meadow collecting all the low hanging fruit so you may turn around and congratulate yourself for having the most fruit, but all of the fruit is mealy and mushy.

“I don’t understand why you are so impressed with yourself.

"Do yourself a favor and image search gaga 2011 and pick that back up! This “real” Nicki is not as interesting as Gaga-knock off Nicki.

“GIVE THE GIRLS WHAT THEY WANT. And stay tuned for my joint with your man. I really think you’re gonna love it!

“In 2017 I hope you find some new inspiration and decrease your butt implants you would honestly look SOOOOO much better if they were just 150cc smaller.”

Azealia Banks responds to Nicki Minaj's shade at her. pic.twitter.com/koclk6acuU

Nicki Minaj is yet to respond.

This isn't the first time the pair have clashed, with Azealia Banks previously calling out Nicki Minaj for making "basic *ss music".

Interestingly, both rappers went to the same school, Fiorello H. LaGuardia High School of Music & Art and Performing Arts, and even reportedly had the same Drama teacher, Mr. Harry Shipman.